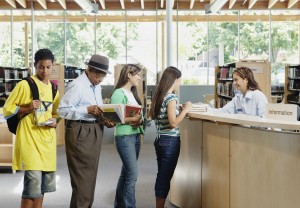 Libraries have changed a lot since we were kids. Most kids will never experience a “card catalogue” with actual cards filed in little drawers, nor will they seek answers from an encyclopedia for a research project.

Today, there are more than 120,000 libraries in the United States and these buildings function as meeting spaces for different groups, a quiet place to study for students and a hub of programs and classes for every age.

It’s fair to say that there are so many comings and goings in your local library that there has to be some sort of tracking system. At the most basic level, anyone can be tracked by their library card, which contains your name, address and other identifiable information. When you swipe your library card to check out books, your card records a history of items you’ve checked out, overdue fines, classes you’ve registered for and other information.

The American Library Association’s Office of Intellectual Freedom believes that people are entitled to privacy in a public library setting. This setting, according to the ALA, encompasses all library activities ranging from reading and borrowing history to activities inside the library itself.

Someone may be watching you

The US government is able to access your library records through the Library Provision of the Patriot Act. This provision says that if a librarian receives an investigative request regarding a patron, he or she is required to compile their library records, which includes computer usage information, circulation data, print records, internet histories and interlibrary loan requests. Librarians are required to comply with these requests. This provision has allowed the National Security Agency and the FBI to obtain and store large amounts of personal data about people.

Why does a library need a surveillance system?

Despite an expectation of privacy, some libraries have implemented a video surveillance system which conflicts with the right to privacy that library patrons expect and deserve.

There are several reasons a library may want to install a video surveillance system. The most common concerns are vandalism in or around the library, crime or suspicious youth activity.

So what’s the problem?

First and foremost, the library is a workplace. Research shows that library staff doesn’t, in general, have a favorable attitude towards monitoring, reported lower employee satisfaction rates and felt that it violated their right to privacy.  Many worry that a surveillance camera would be installed in the employee lounge or other private, staff-only areas, leading to a high-pressure, competitive work environment.

Some library documents and possibly video surveillance footage can be accessed by a Freedom of Information request, which could unknowingly capture private citizens engaged in their day-to-day activities in the library. A surveillance system should only be used in public areas like reading and meeting rooms, stacks and the circulation desks.

Having access to this type of footage puts the library in a precarious position. It’s clear that there needs to be some way of tracking how many people are coming to the library, but that it’s not necessarily beneficial to see the person’s every move once they are inside the library itself.

A traffic counting system is a far more reasonable solution to knowing how many people are in the library at any given time. It allows patrons to remain anonymous but still have their presence counted in the building. This allows the management to have enough staff scheduled during peak hours to ensure everyone is being monitored. It also gives building employees the ability to see where the most people are congregated at any point in time. If an incident does occur, librarians can quickly access reports instead of watching hours of video to pinpoint when an incident occurred.